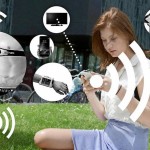 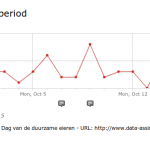 The connection between this WordPress site and Piwik is handled by the plugin WP-Piwik. This plugin is responsible for recording website visits. But it is also possible to automatically send an annotation to Piwik if a new blog post is published. These annotations are for instance displayed in the ‘Evolution over the period’ graph on the visitors overview page. You can easily see when a certain post is published and compare this with the user visits

Google Analytics also have annotations, but unfortunately the Google Analytics API does not seem to have a method (yet?) to receive these annotations from an external source (you could add these manually each time you publis a post, but who is going to do this?) A work around is provided with the WordPress plugin Google Analytics Internal. It should trigger an Analytics event when we publish a post.

It took a while, but via custom reports I’m able to display the publish event and the page visits at the same time. And I could investigate which events took place. But it needs some further investigation to see if we can tailor this more to my wishes…. (and some more time to display the graph with the effect of this blogpost) 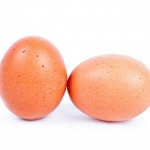